Aaah, the joy of a weekend with nothing planned. No pressing work or chores beyond making sure that the pooch gets her walks and that there is food to eat. In the spirit of making sure I have treats to get myself through the last year of the PhD without going mad but having a tiny budget and also as part of Operation Hygge (see here if you don’t know what I’m talking about), this weekend is going to be all about comfy, cozy things.

I bought myself two Christmas presents last month, knowing that January would be tough and I needed things to look forward to. Firstly, as I have been meaning to learn to crochet for ages and ages, I treated myself to a learn to crochet kit from a lovely lady called Sewfie (you can find her site here). She and I share a love of crafty, eco-friendly things and she has a real passion for sharing her love of crochet with other people so I thought this would be the perfect place to start. This weekend I’m going to finally sit down with it and start having a go! 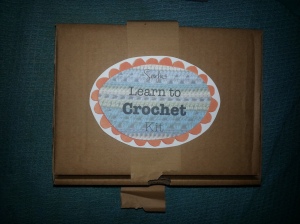 The second gift to myself was my first book from Persephone Books (website here). If you haven’t come across Persephone books before, you’re in for a treat! They specialise in books from 20th century writers, mostly women, whose works have been neglected or fallen out of print so they have a whole host of interesting titles but the other main selling point is that they are BEAUTIFUL! They have gorgeous soft grey covers and the end papers are sourced from textiles or interior designs that are relevant to the timing of the book, so you get a hit of beautiful vintage design as well as a matching bookmark. The catalogue is quite large and still growing so I wasn’t sure which to pick as my first treat but in the end I plumped for one of their best-selling titles Miss Pettigrew lives for a day. 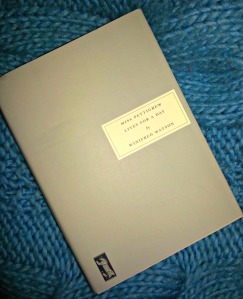 It was written in the 1930s I believe and I know lots of people have a huge amount of affection for it so I am looking forward to snuggling under a blanket and getting stuck in to it. It’s going to be a real treat as given the lack of pennies this year, my book buying habit is going to have to be severely curtailed so I’m going to enjoy every minute of it and dream about when I might be able to get another one!

What do you have planned for the weekend? Hope it is full of hygge!

A very happy new year to you all! I’m starting the year in a bit of a reflective mood, with both the dog and I having been poorly and sadly losing a much beloved family pet. Lots of questions are racing round my mind from the general post-Christmas “What can I eat next?” to the much bigger “What do I want to do with my life?”. The weather is appalling, although I realise we are getting off very lightly compared to other parts of the UK and friends in the US midwest!

So to avoid falling completely into a January slump, my thoughts have been turning to the idea of “Hygge”. I was lucky enough to go to Copenhagen for a weekend in December with some lovely friends (although I failed to take a single picture!) and first learnt about the idea then. 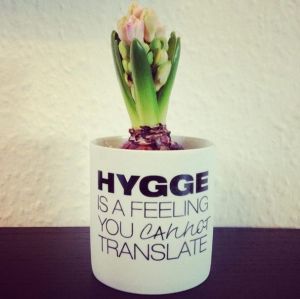 Copenhagen was awesome by the way, lots of cool design and friendly people but entirely set up for coziness despite being cold and dark; lovely lights and candles, pretty stars in the windows and snuggly blankets in all the cafes and restaurants. And then I found this article and a post about it on a lovely blog I’ve just discovered called Cozy Things and it all started to fall into place. 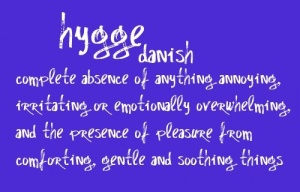 It’s all about being warm, cozy, content, soothed and happy…all of which I am feeling greatly in need of right now and I’m sure many of you are too! So in lieu of any new year’s resolutions I am launching Operation Hygge: to fill my home and life with things that make me happy and cozy and all on a miniscule budget. Well, realistically when I say miniscule, I mean non-existent! Like many of us, this year is going to be extremely tight financially so anything I do has to be about making use of things I already have or that I can beg, borrow or steal 🙂 My make do and mend mentality has been brewing for a while but the excess of Christmas has tipped me over the edge…just too much STUFF. I’m sure there will be a ranty post on this in the not too distant future! All the more reason to hunker down under cozy blankets and knit and read and drink tea and snuggle up with dear ones.

The first part of the plan is the dreaded de-cluttering, starting with the room where I keep all my wool and general crafty stuff. I’m going in, I may be some time…!

As I write this, the snow is coming down thick and fast again and you can feel everything take on a slower pace. In fact it’s been a slow few days around here, with both of us a bit tired and sniffly and feeling the need to just nest and rest and recuperate. This weekend was perfect, where the most arduous chore was taking the dog to the park and marveling at how different the park looks without the thick coating of snow it had just a few days before. 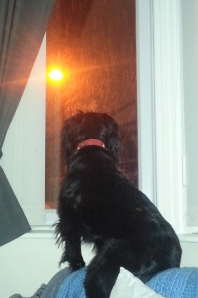 Do you think Pepper might want to go and play in the snow?

A bit of gentle de-cluttering in the house meant a trip to the nearest charity shops, the only kind of shops other than wool and book shops that I could happily lose a few hours in. (In fact, so enduring is my love for the chazza shops that I remember being told as a small child that I could have some money to spend in a shop of my choice as a gift and I asked to go to the charity shop…bless my weird little self!) Happily, the shops are next to one of my other favourite places, the library, so I grabbed some new books to take home with me.

Then there was reading under cosy blankets with lots of cups of tea, a bit of baking, a bit of knitting, but all at a wonderful, leisurely pace. 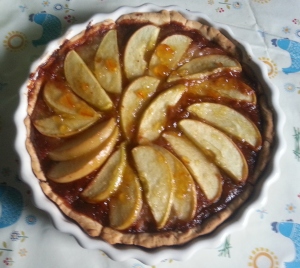 Seeing friends and doing stuff is obviously lovely too but that feeling of being able to do exactly what you want, with no rush and no demands on your time is just delicious. I’m trying to keep that feeling in mind as all too often I end up working at weekends and really need to keep them a bit more sacred so there can be more weekends like this.

I loved seeing that my friend Jess thinks the same about staying in. I’ve known Jess since I moved secondary schools when I was about 14 and I believe our first ‘friend date’ was to see Flintstones the Movie…Jess, is that right?! Anyway, Jess has a lovely blog here called Once upon a Home, all about the ups and downs of renovating a home and definitely worth a read.

As for today, today is slow too. The falling snow means that I can’t take any decent photos of new knits for the shop and I’ve just realised that all the blog posts I thought I had scheduled for last week haven’t actually posted. But you know what, it’ll all get done eventually so for now, I’m going to make a lovely cup of tea, stare out of the window at the snow (and the little field mouse that is currently munching on the bird feeder!) and snaffle up the last bit of that pie before Mr PQ gets his mitts on it. Hope you all have some slow time in your day too x

Does anyone else remember this song? I have very happy childhood memories of belting it out at primary school. Autumn is definitely here and whilst the grass here oop north is best described as completely sodden rather than jeweled, I do still rather like this time of year with that ‘new pencil case’ kind of feeling.

There’s a distinct chill in the air and I’ve been working on some woolly hats and hand warmers which I’ll hopefully get in the shop over the weekend. Things have been very busy PhD-wise over the last few weeks and so every thing else apart from bits of knitting time snatched here and there have been rather on hold. One thing I have been making time for though is the Great British Bake Off, have you been watching it too? Mr Purly Queen has taken to calling one of the contestants my new boyfriend as I’m always raving about his amazing real Shetland fair-isle jumpers! (And he’s not too shabby in the baking department either). 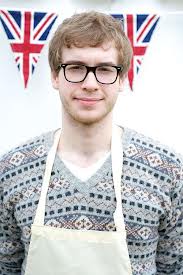 Speaking of baking, last week my lovely friend Liz came to visit at PQ Towers and I wanted to try out a recipe for some biscuits that my sister had sent me. My sister works in My Favourite Shop In The World TM and one of the perks is that they get lots of foodie magazines into the shop for inspiration. She spotted some gluten-free recipes and kindly sent them on to me. There was one recipe that caught my eye immediately: Sea Salt and Peanut Butter Cookies! I luuuuurve Peanut Butter and thought they would be a perfect autumn recipe to scoff down over a cup of tea and a natter. The recipe originally comes from Jamie magazine and I made some tweaks to it to use up what I had in the cupboards. (By the way Jamie, if you’re reading, and I’m sure you are, spelt flour isn’t gluten free. It has very low levels of gluten and great for people who struggle with wheat but if you can’t tolerate any gluten at all like me, it’s a no-no).

100ml molasses (The recipe suggests 250ml Maple Syrup instead of the honey and molasses. Molasses has the benefit of being really good for you but is an absolute bugger to get out of the jar)

1. Preheat the oven to 180 C/ Gas Mark 4 (or if you’ve got a temperamental oven like mine, just put the dial somewhere in the middle and hope for the best). Line your baking sheets with some baking parchment.

2. Combine the flour, bicarb and fine salt in a mixing bowl.

3. In a separate bowl (which should be a bit bigger than the first one), stir the peanut butter, honey, molasses, olive oil and vanilla extract. Pour the flour mixture over the peanut butter mixture and stir until barely combined. It should look a bit dusty looking. Let the mixture sit for 5 minutes and then stir again.

4. Place heaped tablespoons of the mixture on your baking sheets and press down with a the back of a fork.

5. Bake the biscuits for about 10 minutes. Remove from the oven and sprinkle with the sea salt flakes. Cool on a wire rack and then enjoy! 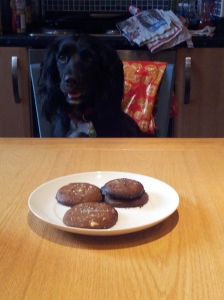 The Mad Spaniel is outraged that the scrummy biscuits aren’t for her!

Yum! Does the Autumn weather make you want to bake more? What have you been baking recently?

An Illustrated Guide to Holistic Healing for Lyme and Chronic Illness

A blog full of humorous and poignant observations.

She can't eat what?!

Tales about a creative life on Dartmoor

This is the story of me, hubby, Little Lady and baby D as we go through our DIY adventure.

Food: from Dawn till dusk

Thoughts and ideas on food, cooking and low-carb eating

The random musings of a messy person...

Because every day should be Joyful